This is about Episode 3 of the Freezing (anime), for technique used by Pandora's, see Accel Turn. For other uses, see Accelerating Turn.

Accelerating Turn is the third episode of the Freezing anime.

Kazuya Aoi once again tries to apologize to Satellizer L. Bridget for his actions during the carnival, but she wishes to eat alone. While Kazuya attempts to apologize to Satellizer, a third year Pandora named Miyabi Kannazuki interrupts the conversation and asks for Kazuya to be her limiter, but he declines, whilst Arthur Crypton and Kaho Hiiragi look on. Crypton had previously warned Kazuya to avoid Satellizer. Satellizer ignores Miyabi and she doesn't take kindly to it, by fighting Satellizer in a battle while Kazuya is restrained and Satellizer gives Miyabi a cut on her cheek, much to her dismay.

Miyabi uses her accelerating turn to fight her, but to her surprise Satellizer can also do the accelerating turn, so Miyabi falls back on her limiters, and gains the upper hand and demands an apology from Satellizer after holding her by the hair. She then demands Kazuya to be given to her. She then slices her uniform, revealing her breasts.

Miyabi then begins fondling Satellizer slowly. She then begins to squeeze her breasts and tell her how good it will feel to be touched, then she decides to take a few pictures of her ass. After taking several pictures, Kazuya finally rebels, releasing a large amount of freezing power, despite not having a baptism. Arthur and Kaho decide to get Chiffon Fairchild. Satellizer then arises and brutally attacks Miyabi as she pleads for her life. Then Yu-Mi Kim tells her to drop her weapon as Kazuya convinces her that it isn't worth it and uses his freezing on her. Satellizer then drops her weapon and is sent to captivity. It is then revealed that Kazuya was able to use that power because of his body containing a large dose of Stigmata. Then another third year named Attia Simmons witnesses it. She then recommends Ingrid Bernstein to teach Satellizer a lesson.

Satellizer's reaction to Kazuya touching her.

Miyabi throws a shocked Satellizer over her shoulder. 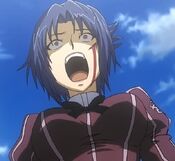 Miyabi after being cut by Satellizer.

Satellizer sneaks up on Miyabi.

Satellizer and Miyabi clash and cause an explosion.

Miyabi demanding an apology from Satellizer.

Satellizer, in self-isolation, after fleeing the cafeteria when Kazuya touched her on her way from Burger Queen.

Satellizer, as she is about to kill Miyabi.
Add a photo to this gallery

Differences Between the Anime and the MangaEdit

Retrieved from "https://freezing.fandom.com/wiki/Accelerating_Turn_(episode)?oldid=60246"
Community content is available under CC-BY-SA unless otherwise noted.