Aika is a Japanese Pandora and the 4th strongest of all second- year Pandoras in West Genetics. She is known as the Manipulator of Water (陶酔の銀幕 Tōsui no Ginmaku) (though in the anime she is referred to as "Intoxicating Bondage").

Aika has dark black hair tied in a ponytail that reaches past her neck, olive eyes and a large bust-size, being comparable with Satellizer's.

Not much is known about Aika's personality. she seems to have a sadistic nature based on how she attacked innocent students, primarily Arthur Crypton for example stepping on his testicles and laughing while she does it. She acts cowardly when faced against enemies stronger than her as evident when confronted by Satellizer during the Carnival, and a second time after Rana single-handedly defeats her allies.

She is seen in the beginning of the first episode fighting in the Carnival as one of the four Pandoras that have beaten out their opponents (The other ones were Ganessa, Trish and Audrey), ranking at #4. She is seen later fighting with Satellizer, alongside with Trish and Audrey, but they're easily defeated by her.

She was recently beaten at the West Genetics Carnival by Satellizer L. Bridget. Subsequently, she tries to exact revenge upon Satellizer's erstwhile Limiter partner, Kazuya Aoi. She, along with Trish McKenzie and Audrey Duval, take on Kazuya, Kaho Hiiragi, and proceeds to torture Arthur Crypton by stepping on his testicles she laughs while grinding her heel deep into his crotch. After torturing Arthur's scrotum she let him go, only to watch him curl in agony from the pain of this torture. She then lifts him up to his knees and wraps her chained flail around his neck and attempts to strangle him. In the nick of time, the transfer student Rana Linchen arrives at the scene and swiftly defeats them.

With Satellizer, Rana, Kazuya, Trish and Audrey, she is in the stadium, waiting for duel to decide who will be Chiffon's successor. While Audrey makes a point that Ticy wins by points in the carnival, Aika argues that Arnett has more battle experience. But she concludes that both girls will be evenly matched.

The two seem like they're friends, and together with Trish, they're the rulers that warn the first-year students about how them have to treat their upperclassmen. Because they lost against Satellizer in the Carnival, they want to  take revenge of her and for that reason they want to punish Kazuya.

The two are seen together very often, and they're in charge of the punishment of the first- year students that don't respect their upperclassmen, and taking revenge of Satellizer by punishing Kazuya and his friends.

She seems to hate her, because she, alongside with Trish and Audrey, wanted to take revenge for her loss against her during the Carnival in Kazuya and his friends.

Because he was with Kazuya when the three attacked, she steps on his testicles to prevent his running. She seems enjoy to do that and she says "tell me how much you like it and maybe i'll leave you something" while she is doing it. 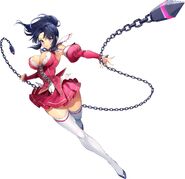 Aika as she appears in Freezing: Extension
Add a photo to this gallery

Retrieved from "https://freezing.fandom.com/wiki/Aika_Takeuchi?oldid=69531"
Community content is available under CC-BY-SA unless otherwise noted.