Arthur Crypton is a first-year Limiter at West Genetics. He is the Limiter partner of Ganessa Roland.

Arthur becomes Ganessa's Limiter having a strong admiration for her. Because of Satellizer's reputation, he constantly warns Kazuya to stay away from her.

Arthur has blond hair and blue eyes. He is normally seen wearing the standard Limiter school uniform or battle uniform.

Arthur is generally a friendly person and very welcoming. Satellizer L. Bridget was initially an exception to this due to her hostile reputation and he tended to stay away from her. He is very tolerant, able to bear with his Pandora partner's arrogant and prideful personality. He is also more than willing to cater to her needs.

Arthur is revealed to be religious, as he noted that he attends church weekly.

Arthur was introduced when Ganessa fled from a ghostly figure. Initially dismissing the figure as part of the haunted house that was going on, Arthur was horrified when his hand went straight through the figure and fled along with Ganessa. When Ganessa fell, Arthur stood between the ghost and the Pandora, proclaiming that he was a churchgoer and that it was his duty as a Limiter to protect a Pandora. The ghost revealed herself to be a student, Alice, pulling a prank using advanced hologram technology. Although relieved, Arthur was attacked by Ganessa upon her bath towel slipping down.

Later, he was on a bench when Ganessa approached to apologize, only for Arthur to be hugged with Hiiragi who teased him about how attractive she was. Ganeessa apologized, and misunderstanding the situation, left. Arthur quickly asked Hiiragi who that was, and got an explanation about her, and her rather infamous attitude. Arthur saw that this attitude was an act, as he witnessed Ganessa's fuming as she cleaned up a public table, and smiled.

When Arthur stumbled across Ganessa arguing with a pair of older students, a couple, about pulling a blossom off of a tree, he swiftly asked her to do the Baptism ceremony with him. Ganessa was stunned, and the older couple left. After explaining to a puzzled Ganessa that he had no partner, he asked Ganessa if she had one herself.

They became a pair a short time later.

Arthur makes his first appearance just after Kazuya enters his dorm room and reveals himself to be his 'next door neighbor'. Arthur greets Kazuya with a handshake. In Kazuya's room, Arthur explains to him the Pandora-Limiter partnership and the Ereinbar Set. He warns Kazuya of Satellizer L. Bridget and reveals that his Partner Pandora is Ganessa Roland, much to Kazuya's surprise.

The next day, Arthur meets Kazuya during class. After Kazuya expresses his want to apologize to Satellizer for interrupting her fight with Ganessa, Arthur and Kaho Hiiragi warn him to stay away from the Untouchable Queen.

At lunch, Arthur briefly meets Kazuya and Kaho. He goes off to have lunch with Ganessa after preparing both their lunches.

Arthur and Kaho meet Kazuya in the cafeteria. There Kaho invites the two Limiters to go into the city for some Karaoke. Kazuya tells them that he is pairing up with Satellizer but hasn't done the Baptism Ceremony. Kaho explains the significance of the Baptism Ceremony while Arthur advices him not to become Satellizer's Limiter since they didn't go through with the ceremony. Arthur and Kaho are then shocked by Kazuya after revealing to them that Satellizer has invited him to her room. Arthur tells them that when he first went to Ganessa's room, he ended up getting hammered and passed out.

In the city, Arthur and Kaho find Kazuya in a restaurant with Rana Linchen. The four encounter the thugs who earlier tried to rob Kazuya and were beaten by Rana. The thugs bring the four teens to a less public location in order to settle the score with Rana and Kazuya. Kaho is unwilling to let them hurt Kazuya and fights them off but Arthur is taken hostage. The thugs force Kaho and Rana to strip. One of them then shoots both of Kaho's thighs, horrifying Arthur and enraging Kazuya.

Kazuya uses his Freezing and frees Arthur. Rana then beats up the thug who shot Kaho, causing the rest to flee. The four teens return to West Genetics to give treatment to Kaho and a fainted Kazuya.

At West Genetics, Arthur informs Satellizer, who has been waiting for Kazuya, that he has been taken to the infirmary to due collapsing from exhaustion of using Freezing. Arthur catches up only to find that Rana has entered a rather heated discussion with Satellizer. Arthur pulls Rana away before it got any worse. He brings her to Kaho's recovery room where Rana reveals to them her six Stigmata which she refers to as the "Tears of Kunlun" and her intentions to make Kazuya her Limiter, much to the chagrin of the two.

While eating lunch with Kazuya, Arthur tells him about the Levon Brooks Incident. He also reveals to Kazuya of Satellizer's family, the L. Bridget, which holds a lot of power. Arthur gets up and leaves just as Rana arrives to give the two some alone time.

Arthur and Ganessa enter a Couple's Eating Contest and compete against Kazuya and Satellizer. The prize being a golden statue of a wiener dog. Arthur and Ganessa lose in the end. Arthur is then left to carry Ganessa back to West Genetics.

Arthur is stationed in the Ravensbourne Nucleotide together with Ganessa, Kazuya and Satellizer. Trouble arrives when Nova Form Cassie Lockheart drives Arnett McMillan through a wall. He and Ganessa establish their Ereinbar Set just as Arnett and Morrison establish theirs. However, their Freezing is proven ineffective against Cassie. Arnett and Morrison are beaten and knocked unconscious.

Ganessa places herself in front of Cassie's Particle Beam to save Satellizer. After explaining her reasons for saving her main rival, she loses consciousness and is presumed dead. Arthur carries her on his back to get her medical treatment. He stumbles but accidentally drops Ganessa. Desperately, he tries everything he can to get a response from his seemingly dead partner even as far as encouraging her to insult him.

Kazuya, no longer able to stand the sight of his friend's desperation, orders Arthur to stop since Ganessa is already dead. But Arthur refuses to listen. Cassie attacks them but hits Satellizer instead who, in her enraged state due to Ganessa's death, is in the process of entering Nova Form. Satellizer fights and beats Cassie. Ganessa is then shown to be breathing. Arthur and Kazuya waste no time and get her to the infirmary.

In Ganessa's recovery room, a relieved Arthur explains to Kazuya the downside of a Pandora's regenerative ability, which happens to be an shorter overall lifespan, but still can't help but feel contented at the fact that Ganessa will live.

Arthur makes a quick appearance during this Arc. He is asked by Satellizer regarding Kazuya's whereabouts. She is told that Kazuya just recently left with Rana.

Ganessa Roland is the partner Pandora of Arthur. Despite Ganessa's personality, Arthur loves her and thinks the world of her. He is dedicated to her and will do everything he can to please her.

He and Kazuya share a strong mutual friendship. They are classmates and are next door neighbors in their dormitory. Concerned for his friend's safety, Arthur warned Kazuya of Satellizer on various occasions. He also expressed gratitude and concern when Kazuya used his Freezing to save him from being held at gunpoint. He is strong enough friends with Kazuya to go to Satella's room despite her reputation and tell her about Kazuya's condition. They may be each others best friends at Genetics.

He and Kaho are close friends and classmates. Second to Ganessa, Kaho is the one girl whom Arthur spends the most time with.

Arthur initially supported Rana in her goal to make Kazuya her Limiter since he was worried for his safety due to Satellizer's brutal behavior. He once tried to give the two time to spend together in the cafeteria by leaving the moment Rana arrived. 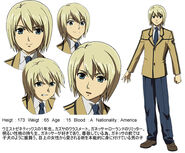 Arthur with Kazuya and Kaho

Arthur and Ganessa's date
Add a photo to this gallery
Retrieved from "https://freezing.fandom.com/wiki/Arthur_Crypton?oldid=68328"
Community content is available under CC-BY-SA unless otherwise noted.