Carol Voltega Miriam is a Rounder in the dimensional world of  Elukarium.

Carol is born into one of the seven most powerful families in Eluka and is heir to the Miriam family. She eventually became a Rounder.

Carol appears nearly identical to Arnett McMillan, aside from a darker skin tone. She wears a revealing robe set that leaves her stomach exposed.

Carol seems to be calm in ways. During the Round when Kazuya used his Freezing, she didn't feel any kind of disgust by it just the opposite. She also shown no objects during the Rounder meeting with her fellow Rounders about bringing down Ibanyle and having to bring Kazuya to join them in the Holy Revolution. Carol gladly assisted Satellizer Alexander in rescuing Kazuya in the dungeons.

Carol participates in a year's Round, alongside Satellizer Alexander and her fellow Rounders facing a Nova. When the Nova uses Freezing on the Rounders, Kazuya Aoi comes to aid Carol and the girls defeating the Nova. Carol watches as Maria Eluka Nova approaches Kazuya.

As the Round ends, Carol meets with the Rounders to discuss about bringing Ibanyle to justice as well of bringing the "Boy From Another World" to join them since he posses the same power as Ibanyle to which they all agree. However they must rescue Kazuya first due to him being put in the dungeons by Ibanyle. Carol along with Satellizer Alexander and Elise make their way to the dungeons but to their surprise that Maria Eluka already rescued Kazuya and joins them to bring down Ibanyle.

In the next meeting with the Rounders, Carol and the others proceed with their plans against Ibanyle, agreeing that it's time for Revolution.

Carol and the army are confronted by Ibanyle and his army. As the Holy Revolution begins, Carol and the Rounders have the upper hand, but are overwhelmed when both armies are killing each other due to the Goddesses pouring their Soul Energy into them. Carol watches helplessly as Ibanyle captures Maria Eluka. They are momentarily saved by Kazuya, who empowers them with his Freezing. However, they are pinned down once more when Pulucsigel Eluka Nova and Bonemian Eluka Nova personally join the battle.

With the arrival of Pandora from Kazuya's world, Carol watches in shock how the unknown girls can battle the Goddesses of Balance on equal footing. She mistakes Satellizer L. Bridget for Satellizer Alexander when the golden-haired girl appeared to her and Elise.

Satellizer Alexander is Carol's friend and fellow Rounder. She finds Satellizer to be a worthy leader in the Holy Revolution.

Carol and her allies team up with Kazuya who comes from a different world to help them in the Holy Revolution.

Carol and her allies joined forces with Maria Eluka to bring down Ibanyle for his crimes in Eluka during the Holy Revolution.

Carol and her fellow Rounders went up against Ibanyle due for his crimes in Eluka and plan to bring him to justice during the Holy Revolution. 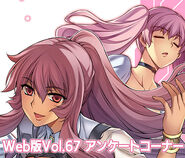 Retrieved from "https://freezing.fandom.com/wiki/Carol_Voltega_Miriam?oldid=69035"
Community content is available under CC-BY-SA unless otherwise noted.