The Cassie Lockheart Arc features Cassie being a student at East Genetics and her life as a Pandora as well of her battle with Satellizer L. Bridget during the Levon Brooks' incident.

The arc begins with two Genetics scientists, analyzing the data they compiled of the young girl on the examination table. They were amazed that the girl was granted three Heroic Stigmata, and believed she'd be the one to revolutionize the future of all Pandoras, the only daughter of the Lockheart family, Cassie Lockheart. The scene then changes to East Genetics, where several students speak highly of Cassie as she walks by. They felt awed by her presence, and wanted to get near here, though the object of their adoration looked more annoyed than complimented.

Cassie then sat down a table in the academy coffee shop, seated with her classmates June and Nena, venting over how people talked about others too much. When the blonde Pandora joked how hard it was for her being so popular, Cassie instinctively denied it. Though Nena countered by saying that one's skill was all-important, so it was only natural for Pandoras to admire the young Lockheart girl. June told her to stop teasing, though she also admitted it felt good being friends with the top-ranked student in their class. Cassie tried to deflect the issue, then recovered and rebutted that she wasn't paying for their food, much to Nena's chagrin. The American Pandora said her skill wasn't as big a deal as everyone believed. In her eyes, there were many other skilled Pandoras on campus, and she doubted she could beat them in a real fight, claiming they'd probably become much better than her in time, and especially since no one was taught High-End Skills until their third year. When Nena suggested that Cassie was saying she was so strong, she didn't need to worry, the American claimed she wasn't listening at all. The blonde Pandora went on to say she heard that it was possible that Cassie had already mastered High-End Skills, but the Lockheart girl refuted it, saying that the reason such skills weren't taught until senior year was because they put too much strain on their bodies were their stigmata not fully developed. So she dismissed the idea of mastering them, though Nena still wasn't convinced.

Suddenly, Cassie is alerted to a Pandora shouting, who turned out to be upperclassman Milena Marius. Said Pandora was berating a departing student for ignoring her. Once Cassie arrived on the scene, the bespectacled Pandora took her leave. Milena was irate at her arrogance, but Cassie told her to calm down. Once Nena and June arrived, they recognized the girl as Satellizer L. Bridget, second daughter of the L. Bridget family. The senior relayed that Satellizer was causing trouble and tried to get her account on the matter, but her inquiry was ignored. Nena agreed with the assessment, deriding her classmate for her attitude, as well as using her family's power to acquire six Heroic Stigmata. She couldn't understand why Genetics would give Kazuha's stigmata to "someone whose personality sucked." June was also concerned, but for different reasons. She knew Satellizer was ignoring the teachers, and becoming more isolated as a result. And that everyone let her do as she pleased because of her family's name, which struck a chord in Cassie's troubled heart. Milena piped in, saying that while their positions were similar, they were polar opposites of one another, since Cassie was well liked, had good grades, and had a great personality. She foresaw her classmate as being one of the Pandoras' leaders one day. Though the American Pandora disagreed, and asked to be excused. As she walked away, Milena wondered if she'd said anything that upset her, though Nena wholeheartedly disagreed, claiming she was correct about Cassie. Though she suggested Cassie was upset about Satellizer, who had three more Heroic Stigmata than her.

Later in the evening, Cassie sits on her bed reflecting on how people, especially her father, have been are pushing her to be a good Pandora and how no one listens to what she has to say. She uses her Accel on her bed causing the bedding to explode. She starts crying and wishes she was never a Pandora; she wonders if Satellizer has been pushed by her family to be a Pandora.

Later, Cassie is in the training room testing if she can use High End Skills since second-years are usually unable to deploy the technique. During the test, Cassie easily overpowers her classmates with the Triple Accel.

Believe in me - Cassie 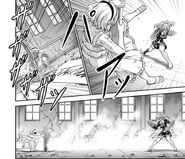 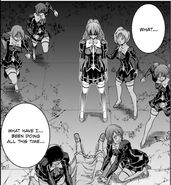 Cassie's doubt and confusion
Add a photo to this gallery

Retrieved from "https://freezing.fandom.com/wiki/Cassie_Lockheart_Arc?oldid=68219"
Community content is available under CC-BY-SA unless otherwise noted.