The Elizabeth Mably Arc features Elizabeth during her time in training camp as a trainee before entering West Genetics and having a instructor with a nasty bad mouth attitude.

Even a fourteen year old Elizabeth Mably had the habit of being naked whenever she could. In the morning the Mably manor, Elizabeth is greeted by her family's maid Martha, who tells Elizabeth that breakfast is ready. Elizabeth is greeted by her father as she comes down the steps and Elly's mother scolds her daughter for eating in her room. Elizabeth's younger sister Daisy Mably, happily greets her while her middle sibling Thomas Mably is praised for seeming a bit more mature. Elizabeth happily reflects on her noble upbringing, so angrily she wonders why she is now crawling around on a muddy hill while it is raining.

Elizabeth is undergoing her six week training to become a Pandora. One of her teammates, Rachel Jonhanson, sprains her ankle and Elizabeth moves to tend to her. Their instructor orders the both of them to get moving and slaps Elizabeth when she is more concerned with helping her ally. The instructor begins stomping on Rachel, better known as GM 162. Elizabeth gives her a hateful glare. Rachel gets on her sprained feet after being beaten a bit more. Elizabeth encourages her to push on, but Rachel is insistent she is not cut out to be a Pandora as the training will get worse at Genetics. Elizabeth takes Rachel's bag and presses forward with double the weight, determined not to be beaten.

Three weeks prior, Elizabeth and her future Pandora compatriots were briefed at the 28th Genetics New Cadet Welcoming Ceremony. Elizabeth is assigned to Platoon #3. The girls, accustomed to their high class lifestyles, resent the lack of a bath with a communal shower in its place. In addition, they must sleep on a bed that is divided into two large boards with a fitting mattress that they all must share. One of the cadets, Rachel from Russia, looks to Elizabeth, wanting to know if she is a Mably. Elizabeth had intended not to really bring up her heritage but finds it senseless to hide it. She confirms her origins and they hit it off quite well since the Mably Corporation is partially known for their make-up. Their instruction, Park Se-Mi, makes a grand entrance, screaming from the top of her lungs. The woman orders the Pandora to their knees in a line. They are quick to comply and the woman explains that all of these girls are Pandora trainee soldiers, making them pseudo Pandora. The instructor begins asking the girls their names, but unhappy with their responses, she begins violently beating them, first a cadet named Alice from France, then Nicole Muskiton, finally comes Rachel's turn. When Rachel is too intimidated to respond, the instructor prepares to punch her, but Elizabeth, finding such violence to be nonsense grabs onto the instructor's arm. Unlike everyone else, Elizabeth is not remotely afraid of the instructor, which the woman admired, but it does not save Elizabeth from a body blow that leaves her convulsing on the ground, begging for air. The instructor tells the girls that are all nothing more than numbers with "GM" in front of it. The instructor loudly explains that all of them are the Chevalier's property and the only way they can leave is through a body bag. She grinds into their ears that they all will listen to her and her alone. Stepping on Elizabeth's head, she makes sure all of her cadets understand.

A day or so later, Instructor Park gets her cadets out of bed, and they have only a minute to get dressed and onto the field for training. The girls follows their orders, but Elizabeth is still feeling stinging pain from the punch she received. It is day three and the princess pseudo-Pandora find the idea of training at five in the morning to be ridiculous. Instructor Park subjugates the girls to run a marathon on only the third day of training. She challenges the girls to stay in formation, matching their paces, which will match their minds. GM 160's chest is still throbbing and loses a "point." After the marathon, the girls are given ten seconds to wash their faces. After the run, Elizabeth feels particularly weak, her hands shaking and she falls over, once again being screamed at by her instructor. As a result, she sentences everyone to the track where they are forced to do another endurance workout. She explains the rules for Pandora to act as a unit, be praised as a unit, and to be punished as a unit, for one's mistake is everyone's mistake. Until that is drilled into their brains, Instructor Park stands between them and breakfast. Some of the girls begin to falter and they blame everything on Elizabeth.

Platoon #3 is eventually allowed to eat, but Elizabeth can barely swallow her own saliva. All of the girls are given a full plate, including six medium-sized rolls of bread they must all eat. Elizabeth forces herself to finish everything except the large amounts of bread. Her platoon leader catches her and scolds her for leaving food unfinished as it was paid for by civilian money. her instructor forced the bread down Elizabeth's throat. Taking a full plate, the instructor pulls it over Elizabeth's head, damning her as just another rich girl. Elizabeth looks down as the other girls run by. Her face is not shown.

That night, one of the other instructors emerges from the bath and is well aware of her demon associate's treatment of her platoon, particularly Elizabeth. The instructor says she's nice in her own way as she regularly checks all of their vitals. While GM159 is done with her night shift and it is not Elizabeth's turn. The pain Elizabeth has been enduring is beginning to fade, and the instructor comes out and orders her to the track while GM159 must resume her post. Elizabeth goes to the track with rocks on her back rocks. She is to run around the track forty times before morning. If not, she'll have to do it all over again the next night. Elizabeth begins and Instructor Hilda calls out Park on her "demonic" behavior. In actuality, the Pandora is expected to drop most of the rocks while they do not truly realize the weight is decreasing. It is a common punishment, but it is meant for the girls to shelve their pride as the rocks fall out. Elizabeth performs the exercise, and it takes her twenty minutes to do five laps. She needs to hurry. By morning, Park goes to check on Elizabeth who has only done 39 laps by 5am; however, she has not dropped a single rock. Rather, she picks up any rocks she drops. Elizabeth completes her last lap and collapses at Park's feet with the instructor very impressed.

On a boat, the pseudo-Pandora are in scuba gear, holding their helmets. Park Se-Mi is ever screaming, but this time only to give instructions to her platoon on their last training exercise. They are to plant an Anti-Nova bomb in some rubble underwater. She loudly adds that none of them have dropped out in these past six weeks. While Rachel is shaking, Elizabeth Mably calms her and is relieved that this brutal training is almost over.

At the control center, a Pandora scientist relays the exact details of the mission. There are four groups of three girls and all of them will have three minutes to plant their bomb. Afterwords, the bomb will set off in eight minutes. Rising to the surface will be the end of the exercise, and all of them have twenty minutes of oxygen in their scuba tanks. Without a hitch, all four teams are able to plant their bombs, but Rachel oddly dozes off for a moment. Se-Mi activates the bombs. The girls begin to rise to the surface, but Rachel dozes off again. As Rachel comes too she pushes down something while swimming up. Metal pipes begin collapsing around her.

Instructor Park begins to hear the team's distress and demands a response from Elizabeth. Rachel has been caught between two pipes, and Elizabeth wants to save her. Elizabeth and Nicole, the other teammate, are instructed to leave Rachel. Nicole quickly moves to the surface while Rachel cannot help but beg Elizabeth not to leave her. Elizabeth plans to move the pipe herself. Se-Mi is quick to assume her scuba hear and save her cadets though very angry Elizabeth insists on disobeying her. Park draws her double bladed lance Volt Weapon Savaging Longius, which shreds the pipes, freeing Rachel. The girls take to the surface immediately; however, destroying the pipes caused the debris to destroy the timer. The bomb is about to explode. Park grabs onto her cadets and performs a Double Accel to beat the explosion to the surface. The explosion causes a chain reaction and the other bombs explode prematurely. Park throws her cadet high out of the water with her inhuman strength. The explosion causes a geyser of water to burst up, but everyone is safe. Everyone worries for their platoon leader and Elizabeth uses her remaining oxygen to go find her and drag her to the surface. However, Park's Pandora-enhanced body and Volt Textures can survive an explosion. She's visibly unharmed and grabs onto a tearing GM 160, who is astonished that her platoon leader is alive. Instructor Park again insists that this cadet is incredibly stubborn.

At the end of the six weeks, all of the girls are dressed in their cadet uniforms, and they have passed their training in a final farewell ceremony as they will soon be sent to Genetics. Hilda spots Park, who is not sending off her cadets. Hilda chuckles at the fact that Park is a demon instructor, whose cadets hate her, but she regularly gets handwritten mail from her former trainees. While Elizabeth is walking to find Park, she overhears Hilda tells Park to stop beating herself up over the death of her first platoon. Park insists that it was her fault and that she will never forget their pointless deaths two years ago at the 8th Nova Clash. She believes that her inexperience and naivete cost those girls their lives as she did not train them on the true despair that could be wrought on the battlefield. Park believes that all the hate mail she receives is proof that she trained those girls well as they are alive and strong enough to keep writing her with all that hate. Elizabeth decides not to approach her instructor. Instead, she glares at her instructor and fervently agrees that Park Se-Mi is a violent woman worthy of absolute contempt. Therefore she too will write to the demon woman every year to prove that she, a piece of garbage, is still proudly alive. Elizabeth's glare then turns into a salute toward Instructor Park. 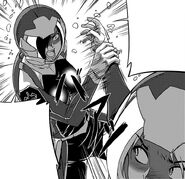 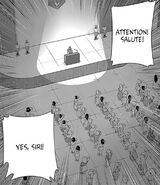 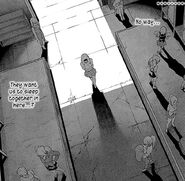 Retrieved from "https://freezing.fandom.com/wiki/Elizabeth_Mably_Arc?oldid=68832"
Community content is available under CC-BY-SA unless otherwise noted.