Elize Schmitz is a doctor stationed at West Genetics and a former member of the Numbers unit.

Elize is a German doctor, Pandora, and veteran of the 8th Nova Clash, who fought alongside Kazuha and Yu-Mi. She now works at West Genetics, having been stationed there since 2062, and is responsible for healing the Pandora when they are injured in combat.

Elize is a tall woman with short green hair that reaches her neck, accompanied with dark eyes. Her hair comes down onto her face in several bangs, and a pony-tail tied up in the back. Known for her height as a Pandora, Elize is the tallest woman recorded throughout the series.

Her usual outfit consists of a white lab coat over a lavender, long-sleeved, button-down shirt, a dark brown skirt, light brown stockings and light brown boots. Unlike her partner Yu-Mi who is known for her splendid curves, Elize is not as buxom and has the second smallest bust size shown so far throughout the series, after Attia Simmons.

During her student days in West Genetics, Elize was known to be a very laid-back person in comparison to her close friend Yu-Mi; who was mostly always serious.She was shown doing things such as sleeping in late when she had classes and, much like many Pandora's throughout the series, she has shown a consistency for liking to feeling other women's breasts (as seen when she grabbed Yu-Mi's breasts in the shower). She is defined as being very level-headed and calm, usually keeping a relatively cool head even when situations are dire. She was also very caring and understanding, occasionally giving words of wisdom to those who need it, such as when she had told Yu-Mi that she was wrong for hitting Kazuha after the girls victory in the Pandora Festival. Following her laid-back behaviour she seems to like to take a 'back-seat' in most situations, such as that she usually doesn't have much to say whenever her partner Yu-Mi or other Pandora would do something brash unless its completely necessary for her to.

As years have passed, Elize has not changed that much since her days as a student at West Genetics. Her laid-back behavior has seem to become less so, but regardless she still displays a level of level-headed and calmness that she had.

Elize was first shown after Yu-Mi arrived at her doorstep with some underclothing that had been accidentally been given to the Yu-Mi instead of Elize. After giving these items to Elize and retrieving her own, the two girls exchanged scathing remarks which led to a brawl between the two. The two were shown as heated rivals, with Yu-Mi holding the position of first in her year and Elize holding second. Elize constantly schemed to overcome Yu-Mi, assembling a battle list for the next Carnival and declaring her intent to overcome Yu-Mi with a near psychotic zeal.

This rivalry would come to a boiling point when Elize began attempting to partner with Max Hemilton, a Limiter Yu-Mi had her eye on. With both girls fully prepared to fight over this Shion Nayfield stepped in and told them to resolve their differences in a different way: contests.

These contests ranged from swimming, chess, eating, limbo, and an endurance contest to see which girl could stay in a sauna the longest. With both girls gaining victories they decided to settle things with their old and favored route of violence. Before the two could engage one another, Max stepped in and revealed that he was actually interested in Shion.

Feeling foolish, both Pandora collapsed on to the grass and slowly admitted that they had originally begun their rivalry over ridiculous reasons, and they bonded over the fact that they had both been dropped by the same boy.

They were later seen to be much friendlier with each other, although still bickered at times.

In 2061, Elize fights in the 8th Nova Clash alongside Yu-Mi Kim and Shion Nayfield. Due to the poor weather and fighting ability of the Nova, Elize counsels retreat but is denied by Yu-Mi. Kazuha Aoi suddenly appears and begins pushing the Nova back, boosting the Pandora's morale.

In 2060, Elize is a senior and rooms with Yu-Mi. After oversleeping, Elize hops in the shower with her friend and teases her about her rather large bosom. The two then attend a meeting held by Sister Margaret. Afterwards, a tired Elize and Yu-Mi meet up with Shion who informs them that Gengo Aoi's granddaughter has begun attending West Genetics. The group is suddenly interrupted by the girl in question, who bumps into Yu-Mi. Elize breaks the ice by joking about Yu-Mi's breasts and the group begins to warmly greet Kazuha.

After Yu-Mi has a confrontation with Kazuha over the latter using her family connections to get into the Numbers, Elize lectures her on being a proper role model and suggests she apologize. She accompanies Yu-Mi to Kazuha's house where the two learn of her living situation and distance from her grandfather. Yu-Mi attempts to apologize, but when Kazuha asks for more, an angry Elize attempts to reprimand her. When it is revealed that she was joking, the three Pandora reconcile and agree to work together.

Elize later accompanies Yu-Mi and Kazuha in breaking up the fight between Mi-Ryung and Kotou. Elize objects to Yu-Mi allowing the fight to proceed, but does not interfere. When the fight causes the Dummy Nova to activate, Elize leaves to get help.

The next day, Elize visits Yu-Mi in the recovery center. She scolds Yu-Mi for her behavior but also informs her that Mi-Ryung and Kotou have made up. She then asks if the rumors saying Kazuha was the one who defeated the dummy are true, and is in disbelief when Yu-Mi confirms them.

When Yu-Mi and Kazuha are finally released from their probation, Elize greets them.

Elize is introduced, for the first time, stopping the fight of Ganessa Roland and Satellizer L. Bridget, along with Yu-Mi Kim. She is later seen sneaking up on Yu-Mi bringing her coffee. She then states, more or less, about Kazuya being Kazuha's brother, reminiscing about the old days.

She is first seen rushing Miyabi to the emergency room, while talking to Yu-mi asking if she was really looking after the students. She then rushes into the operating room ready for surgery.

She along with her cohorts is informed about the attack by the Novas on West Genetics. She and her fellow Pandora's manage take out three of the Novas but were unable to catch the fourth one, as it made its way into the Ravensbourne Nucleotide.

She is seen with Yu-Mi watching the news of the E-Pandora scandal. She then comments that Scarlet Ohara and Mark Spencer are just scape goats, and then comments that the Chevaliers' reputation will be permanently damaged after this scandal.

She is first seen enjoying the sun when Yu-Mi interrupts her to help her out with the papers about the new Valkyrie Project, named after the Norse mythology maidens. She is later seen talking with Yu-Mi about the project stating that although they need generator to fight against the Nova they are still very skilled fighters, having went through intensive training to be part of the 1st Valkyrie regiment.

She is seen watching a monitor along with other spectators watching the joint exercise with great anticipation on how well the Valkyries will do. She then perceives that the Pandora vital signs are unstable, after the dummy Novas start going out of control.

Elize attends Sister Margaret's debriefing of the student body following the 12th Nova Clash, accompanied by Yu-Mi. Afterwards, the two teachers discuss the student's doubt about secrets being kept from them. Elize believes that they will need a solid plan soon and Yu-Mi replies that no one is capable of making one.

When Gengo Aoi takes over West Genetics and makes it his new headquarters, Elize attends a meeting alongside her colleagues to discuss the current situation. Elize listens raptly as Gengo explains his theory behind the Nova and the existence of conflicting dimensions. She questions whether the Chevalier are aware of this fact, which Gengo confirms that they do not.

After the meeting, Elize leaves with Yu-Mi. While her friend is furious over Gengo's actions, Elize is composed and calmly points out the logic behind his actions. She explains that Gengo could have easily conquered the world whenever he wished to and since he hasn't, it must mean he has no desire too. She reminds Yu-Mi that the Chevalier will not forgive their association with Gengo and will treat them as criminals. She asks Yu-Mi whether she will trust Gengo or the Chevalier.

Yu-Mi and Elize fought together in the 8th Nova Clash along with Kazuha as part of the elite Numbers unit. They are very close colleagues and are often seen talking together. Elize seem to have a very high level of respect and care for Yu-Mi as a colleague, formerly usually announcing her title as "Yu-Mi the Gorilla" both as a tease and some form of admiration.

As former members of the Numbers, prior to Kazuha's death, Elize and Kazuha have been shown to have a very close knit relationship. This because of the fact that considering how similar they are personality wise (both being laid-back), the two have a mutual understanding for one another unlike Yu-Mi who was mostly always serious. 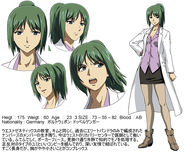 Elize in the 8th Nova Clash

Elize as she appears in Freezing: Extension
Add a photo to this gallery

Retrieved from "https://freezing.fandom.com/wiki/Elize_Schmitz?oldid=68501"
Community content is available under CC-BY-SA unless otherwise noted.