Erectar is born as a Goddess of Balance, being the eldest among her sisters, and ruler of Eluka.

Erectar has long hair and eyes that are black. She is in her complete Nova form almost similar to that of Chiffon Aoi's Nova form. Like her sisters, she has a structure with a beehive like ball that contains souls of the deceased attached to her back. She has a Stigmata implanted on her forehead.

Erectar is depicted as a calm and rational individual, but underneath her majestic and awe-inspiring exterior looms a sense of aloofness and radical dogmatism that becomes visible in situations that exceed her control. As a Goddess of Balance, Erectar should view human life with an air of utter neutrality, but the reality is much bleaker. She will not actively kill humans to manipulate Soul Energy but will not stop her sisters from doing so. She is also aware of Ibanyle and her fellow Goddess's abuse of Soul Energy but does nothing to correct the imbalance. Her reasons for staying neutral don't come from a sense of devotion to absolute neutrality, but a selfish desire to be the highest being and she takes a lot of pride in acting as the supreme being of Eluka. She is convinced that there is a clear hierarchy that should be respected and by staying neutral or distant to what happens on Eluka she is fulfilling her end of that bargain.

When posed with a threat, Erectar tries to retain her neutrality and is the last to directly engage with her opponents. However, when threatened by beings equal to her, she is far more frightened and irrational. Erectar believes the only path is self-preservation and destruction of the enemy. She mistakenly and fervently believes the Transcendent Pandora of Platoon 13 to be Nova who wish to destroy Eluka simply because they have the strength to do so. Her word is law and by default righteous. Platoon 13 was wrong to think Erectar the more sensible of all the sisters and susceptible to reasonable diplomacy, because Erectar is the driving force behind the unreasonable violence carried out by her sisters who realize sooner than Erectar that diplomacy might be a better solution to retain the balance. It's revealed by Maria that Erectar can force those to serve her will and wont submit to another's will.

Erectar first appeared during Maria Eluka Nova's civil war against Ibanyle. She hovered above the battlefield with her fellow Goddesses of Balance. Erectar did not intervene when Pulucsigel influenced the battle in Ibanyle's favor by overwhelming his enemies with soul energy and forcing them into Nova Form. Erectar only mused that it pained her heart to be one of the few meant to determine the fate of humanity. She continued not to intervene when Kazuya took command on Maria Eluka's forces and when her sisters began to slaughter unruly humans.

When the Pandora of Platoon 13 arrived as singularities, Erectar expressed mild shock, but when Rana Linchen and Satellizer L. Bridget produced Stigma Wings, she expressed more alarm. After Satellizer critically wounded Pulucseigel, she dictated the mechanics of the Pandora's powerful Accel. She finally intervened and descended before Satellizer, questioning if the young girl was like herself, a Goddess of Balance. Satellizer responded with an attack, but Erectar was defended by her sisters. When Erectar's sisters admitted they had to take their opponents seriously, Erectar solemnly agreed and attacks with multiple lasers.

Upon seeing Bonemian being killed by Rana, Erectar comes to see that the Pandoras are Nova that sent to destroy them. Erectar turns to Maria Eluka asking her to join them to defend Eluka to which her sister accepts. She and her sisters form in to a gigantic Nova. As the battle with Platoon 13 continues, Erectar, in Nova form unleashes a powerful Freezing on the Pandoras but to her shock, Kazuya unleashes a powerful Omnidirectional Freezing to counter hers. 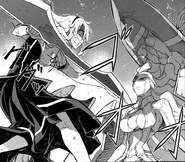 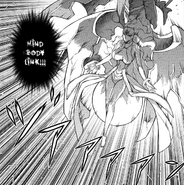 Freezing
Add a photo to this gallery

Ibanyle is Erectar's loyal servant who serves under her will.

Maria Eluka is a former fellow goddess, Holy Mother, and Erectar's youngest sister. Erectar deemed Maria Eluka as a traitor who sided with humans during the Holy Revolution against Ibanyle but had Maria Eluka join her to fight against the Pandora that came from Earth.

Hekusania and her sisters battled the Pandoras who were transported from Earth as their goal is to bring Kazuya Aoi back home safely. She assumed that they were other Nova sent to destroy them and overthrow Eluka.

Retrieved from "https://freezing.fandom.com/wiki/Erectar_Eluka_Nova?oldid=68793"
Community content is available under CC-BY-SA unless otherwise noted.