Satellizer L. Bridget engages in battle with Ganessa Roland, however a cold causes her Volt Texture uniform to dissolve, including her underwear. Ganessa laughs at her and taunts her for making her underwear out of Volt Texture. Kazuya then warns Satellizer that Rana is behind her, but it's too late. Rana begins to molest Satellizer by playing with her breasts. Rana asks Satellizer why she is naked in front of Ganessa. Satellizer demands Rana to stop and reminds her that she is supposed to be called the "Untouchable Queen", but Rana continues and insists Satellizer do the same because it is of divine karma.

Kazuya, however says that the brush of the sleeves are the divine karma and not groping. Believing Satellizer disabled her Volt Texture on purpose, Rana and Ganessa follow suit, but when Kazuya explains that Volt Textures are affected by colds, Ganessa jumps forward and slams her vagina in Rana's face, while Satellizer tries to re-enable her Volt Texture, but is unable to do so because of her cold. Rana and Ganessa then catch her cold, resulting in the same symptoms. 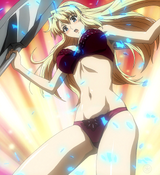 Satellizer wondering what happened to her uniform before...
Freezing ova01.jpg
...her underwear vanishes as well and she is left stark naked.

Ganessa noticing Arthur paying attention to Satellizer and Rana.
Add a photo to this gallery

Retrieved from "https://freezing.fandom.com/wiki/I_Want_to_Touch_Her%E2%99%A5Satellizer,_the_Girl_with_Glasses?oldid=60055"
Community content is available under CC-BY-SA unless otherwise noted.