Lab 13 is the illustrious facility that developed the Pandora Project. It is also the birthplace of the Legendary Pandora. It was founded and led by Dr. Gengo Aoi.

Lab 13 was created in 2022 with the sole purpose of developing the Pandora Project. After its foundation, many researchers came to join the project, including Dr. Scarlett Ohara in the year 2053, who personally oversaw the training of Gengo's granddaughter, Kazuha. The project included the Legendary Pandora, which are several hundred times stronger than ordinary Pandora. The five sisters were created from Maria Lancelot's and Gengo Aoi DNA. Ryuuichi Aoi, the father of Kazuha and Kazuya Aoi was also most likely created in this facility. 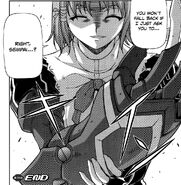 Chiffon Fairchild (Deceased)
Add a photo to this gallery

Arcadia Aoi
Add a photo to this gallery

In 2022, Gengo Aoi meets with Howard L. Bridget to discuss funding for a super-soldier project that would enable humanity to fight back against the invading Nova, accompanied by Director Alfred Hughes. Over the course of the meeting Gengo advocates the Pandora Project over the Valkyrie Project, resulting in Howard choosing to fund the former.

In 2023, Lab 13 is up and running at full capacity, with Gengo as the Head Researcher. The first stage of the Pandora Project focuses on the growth and development of the Legendary Pandora.

Lab 13 is first mentioned when Kazuya Aoi finds a photo of the Legendary Pandora in Gengo's photo album. They are later seen again in Gengo's flashback.

When the remaining Pandora are nearly wiped out by the Nova-Commander and her army of small-type Novas, three of the sisters from Lab 13 appeared; Cassandra, Teslad, and Windy May. Along with their sister Lucy Renault, who had been masquerading as a Valkyrie for the past year, they soon turned the tides of the seemingly lost battle. The Nova army was rent asunder, and their commander was personally felled by Windy.

After the great battle had ended, Gengo Aoi appeared on the scene, and revealed that all of the sisters from Lab 13 are from the same blood-line as Kazuya Aoi. He also tells them about their strength, which he proclaimed was several hundred times greater than the strength of an ordinary Pandora.

Retrieved from "https://freezing.fandom.com/wiki/Lab_13?oldid=66818"
Community content is available under CC-BY-SA unless otherwise noted.