Maria Lancelot is considered the world's first Pandora. In reality though, she is a Nova that has allied itself with humanity for unknown reasons. All of the Pandora's Stigmata are actually fragments of her crystallized body. As a result of this Maria is hailed as the "Mother of All Pandora" and the "Holy Corpse." She is the biological mother of the Legendary Pandora and Ryuuichi Aoi and the grandmother of Kazuya, Kazuha, and Arcadia.

Maria's body is stored in the Ravensbourne Nucleotide, West Genetics' secret underground chamber, and was the Nova's target during the 10th Nova Clash.

The Nova sent Maria to Earth as the vanguard of their conquest of the human race. She materialized on the planet over a lake, near the house of Gengo Aoi, who named her. Despite her mission to destroy them, Maria sympathized with mankind and chose to help Gengo fight for humanity's future.

When the Nova invaded Earth, Maria fought single-handedly against them in the early Clashes before her presumed death. Her body became crystallized, and was sealed away. In 2050, her body was transferred to the Ravensbourne Nucleotide under West Genetics. From it, Gengo Aoi developed and perfected the Stigmata system, which gave birth to the Pandora. Her body still remains under the academy to this day. Her DNA was used by Gengo to create five special Pandora (Chiffon, Cassandra, Windy, Teslad and Lucy Renault), and at a later stage, mindless clones by Scarlett Ohara. Maria is revealed to be the biological mother of Gengo's son, Ryuuichi Aoi. It is shown that though her body is crystallized and parts of her body are missing, she is in fact still alive and conscious; shown when she looked at Scarlett Ohara and showed her the "truth of everything."

Maria has long blonde hair that runs all the way down to her thighs. Her regular attire was composed of a simple sleeveless dark blue top, and a long light purple skirt that reached her ankles. Her attire is similar to that of Kazuha Aoi in her Genetics uniform, Gengo possibly basing Kazuha's dress on Maria's raiments. Maria's most notable feature is her eyes, which has vertical slits over each pupil, a sign that she wasn't entirely human. Indeed, for Scarlett Ohara revealed in her flashback that Maria's genetic structure is similar to that of the Novas.

When she fought, large protrusions grew out of her back, and she wielded a large metallic claw, with two floating shields by her sides. After her passing, her weapon was aptly named Anti-Nova. Currently, there are only two Pandora equipped with a duplicate of this rudimentary Volt Weapon: Roxanne Elipton and Chiffon Fairchild, the latter's version being named 'Anti-Nova Trial Version', seeing as it is a copy of the original.

In the brief flashback Gengo had while sitting in his chair on the balcony. Maria appeared as a gentle woman whom remained silent, even though Gengo asked her if they were to survive "that". Instead of answering she chose to catch a tear-drop from Gengo onto her finger, and sip it up. Through that procedure she conveyed enough information to Gengo, almost like, as if their hearts were to be resonating (according to Gengo).

Maria Lancelot is renowned as "The Mother of all Pandora," and her corpse resides in the Ravensbourne Nucleotide. It was the primary target of the four S-Class Nova who engaged Earth. The Nova efficiently made use of their assimilated Nova Form Pandora to effectively locate Maria and transport them to her whereabouts. The remaining S-Class Nova were, however, defeated in the nick of time, just as they were about to destroy Maria.

Maria Lancelot clones are revealed to be the true research goal of Dr. Scarlett Ohara, as the E-Pandora are only a cover story until the clones are perfected, to replace E-Pandora and Pandora in the fight against the Nova.

The Maria Lancelot clones resonate with the unknown type Nova that Amelia Evans devolved into, and became Nova themselves.

Chiffon Fairchild is initially believed to be a reincarnation of Maria Lancelot by Satellizer L. Bridget, as Chiffon's fully deployed Volt Weapon is the same as Maria's.

In a flashback, she first appears on Earth in the early twenty-first century, materializing before a young Japanese man who was rowing on the lake outside his villa. She's given the name Maria, allowed to live in his house, and comforts him when he comes to her room, tears in his eyes.

As the joint training exercise descended into pandemonium, Gengo made his way into the Ravensbourne Nucleotide, and asked Maria to give their daughters her power. Some time later, Sister Margaret enters the inner sanctum to confront Gengo on what was transpiring above. After some heated conversation, the newcomer left Gengo and Maria to their own devices.

Days after the 12th Nova Clash ended, Gengo returned with Scarlett Ohara. After some heated conversation, Gengo revealed Maria's greatest secret: the "Mother of All Pandora" had not perished in the 4th Nova Clash, she was still alive. Maria herself demonstrated that fact as she gazed at the invalid woman, an unimpressed look in her alienated eyes. When asked to have everything explained, Maria complied and connected her mind to the suddenly frightened woman before her, and showed her exactly who she really is.

When Arcadia Aoi was awoken to fight in the 13th Nova Clash, she appears to briefly communicate with Maria before heading for Gengo's base.

When her descendants are linked to her in an effort to decipher more of her message for humanity, Maria sends Kazuya to another dimension, much to Gengo's shock. She appears to sense the presence of a new type of Nova Pandora in the battle outside of West Genetics.

In the dimensional world of Elca when Kazuya uses his Freezing battling the Goddesses of Balance, Maria appeared in the Freezing field and approached him along with the rest of her family, but soon walked away.

A flashback is shown in 2014 when Maria came to Earth above the lake and first met a young Gengo who made artificial pillars to test the theory of the wave of singularity which became his first experiment. Maria meeting Gengo was the beginning of everything. Gengo learn from Maria of mankind's fate but will not allow it to end and to be a human being who will fight against God. Gengo executed his plan using all the information through Maria with a single point wave reflector that was installed in locations around the world to unite everyone which became effectively thanks to the Nova. The device allowed Gengo to recognize the transcendence that created the whole world as "Nova" and the organization that fights them called "Chevalier".

In Kazuya's Freezing field, Maria appears to him once more telling him that he's surpassed his grandfather and can stop chasing after him since Kazuya evolved into a singular being capable of moving forward with his own choices instead of being swayed by the visions of the Transcendental Will. She encouraged her grandson to go save Elca and Gengo to whom she loves dearly.

They first met on the lake outside Gengo's house. He regarded her as a goddess, and treated her as such as they lived together. His reverence of her never changed, even after the long years that followed in her "death." Such reverence eventually led to his falling out with Scarlett Ohara, who'd done a map of Maria's genetic structure without his permission. In his mind, Ohara was playing God, regardless of her intentions. When Ohara essentially proclaimed Maria was nothing more than a resource to be exploited, Gengo promptly terminated her contract.

Later, when Chiffon Fairchild revealed her true form during the 11th Nova Clash, Gengo recognized it as the same form that Maria Lancelot once assumed.

The Legendary Pandora, Cassandra, Teslad, Windy May, Lucy, and Chiffon, are Maria's daughters. She is the source of their Stigma Body.

Ryuuichi is Maria's son and the source of his stigma body.

Maria's eldest granddaughter. It's unknown if the two ever met.

Kazuya is Maria's grandson. Upon learning who his real grandmother was Kazuya denounces her and suffered a mental breakdown.

Arcadia is Maria's youngest granddaughter and the only known family member, besides Gengo, to have interacted with her.

Shortly after the 7th Nova Clash of 2053, Nova researcher Scarlett Ohara began to create a map of Maria Lancelot's genetic structure. In her mind, completely understanding Maria's powers would've helped immensely in their war against the Nova, and saved countless young people from dying on the battlefield. However, when she reported her results to her superior, Gengo Aoi, she was viciously slapped and then berated for her actions. Even though she hadn't asked for permission, she felt she'd done nothing wrong. Gengo disagreed, and soon fired her after a heated verbal exchange.

Years passed after that incident, and Ohara vowed to prove herself right and Gengo wrong. To that end she began the secret Type-Maria project, which would've created an army of Maria Lancelot clones to fight against the Nova, and thus validate her stance. To hide the project from the world, she created the E-Pandora project as a means to hide her ongoing project. She quietly continued her project while the world was focused on the E-Pandora's, courtesy of the Chevalier. But when the E-Pandora revolted, one of them, Amelia Evans, broke into Ohara's inner lab and discovered the ghastly truth. Unable to bear the immense grief, Amelia began to transform into a Nova. This prematurely awakened the Maria clones, who broke out of their cylinders and targeted her. The clones were then absorbed into Amelia's body, and thus helped complete her transformation into an Unknown Type Nova, which brought down parts of the ceiling onto the prone Ohara, who was too thunderstruck to move. With the clones gone, the Type Maria project came to an end.

Some time later, Ohara was brought before Maria by Gengo Aoi. Maria thought little of her at first, but agreed to Gengo's request to show the crippled woman who she really is.

As headmistress of West Genetics, Sister Margaret essentially serves as the guardian of Maria's body, sealed below the academy in the Ravensbourne Nucleotide.

Erika Kudo served as the surrogate mother for Maria and Gengo's child, Ryuuichi Aoi. She also replaced Maria as the public wife of Gengo, while Maria was his private love. Kazuya Aoi believed for most of his life that Erika was his true grandmother. 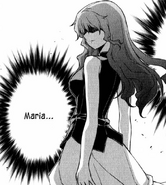 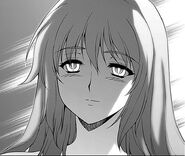 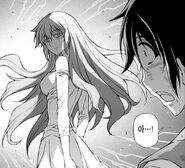