Pulucsigel is one of the Goddesses of Balance and rulers of Eluka. She is the third born of her sisters.

Pulucsigel has long hair and shown in her complete Nova form almost similar to that of Chiffon Aoi's Nova form. Like her sisters, she has a structure with a beehive like ball that contains souls of the deceased attached to her back.

Pulucsigel seems to be that of a sadistic goddess as she enjoys torturing and killing humans and taking their Soul Energy. She's overconfident when going up against the Pandoras from Earth believing that she is powerful than them.

Ibanyle's forces captured Maria Eluka due to Hekusania Eluka Nova's interference, but Kazuya arrived to shift the momentum of the battle with his Freezing. When Satellizer Alexander Eluka was about to kill Ibanyle, Pulucsigel interfered directly and by smashing the Rounder with her feet. Pulucsigel turned her attention to Kazuya and acknowledged his power. She wished to study him but only deemed that she needed his brain and the torso connected to it, none of his limbs. Pulucsigel was immune to Kazuya's Freezing and began to disintegrate his hands. She was stopped by the arrival of five singularities.

The singularities briefly conversed before Roxanne Elipton argued to make peace with the goddesses. Pulucsigel immediately opened fire on Roxanne, but she somehow instantly appeared behind the Nova. Pulucsigel prompted all five singularities to attack her. Roxanne and Charles Bonaparte distracted her as decoys. Cassie Lockheart cracked an opening in her barrier defenses to allow Rana Linchen to deliver a powerful blow with her transcendent power. The four girls continued to team together brilliantly, which was only meant to buy Satellizer L. Bridget time to deal a critical blow with her own Transcendent Accel.

As the battle rages on, Pulucsigel and her sisters team up and attack Rana but to their shock to see her stand up with an incredible amount of Soul Energy and killing Bonemian Eluka Nova.

Soon after, Pulucsigel and her sisters merge into a gigantic Nova. 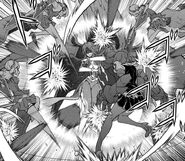 Barrier
Add a photo to this gallery

Ibanyle is the servant to Pulucsigel and her sisters. She mostly favors him too much.

Maria Eluka is Pulucsigel's youngest sister and a former fellow goddess who was deemed as a traitor.

Pulucsigel has taken interest in Kazuya due to his ability to cast Freezing. She almost made Kazuya her servant by torturing and possibly killing him in the process.

Hekusania and her sisters battled the Pandoras who were transported from Earth as their goal is to bring Kazuya Aoi back home safely. She was fatally wounded by Satellizer.

Retrieved from "https://freezing.fandom.com/wiki/Pulucsigel_Eluka_Nova?oldid=68794"
Community content is available under CC-BY-SA unless otherwise noted.