This is about Episode 1 of the Freezing (anime), for other uses, see Disambiguation/Untouchable Queen

Untouchable Queen is the first episode of the Freezing anime.

Satellizer L. Bridget is seen stripping out of her bra and panties, then activating her Volt Texture and all of a sudden she is fit into some clothing that is made from her volt texture. Then a radar is shown of her fighting other students who are second year Pandora's. Satellizer, due to her ferocious fighting skills, has earned the rank of first place in the second years carnival. She easily defeats each of her opponents, winning yet another carnival. During a class Yu-Mi Kim discusses her experience as a Pandora.

Somewhere else, Kazuya Aoi prepares to endure his first year as a Limiter at West Genetics (the name of the school). Having previously lost his sister Kazuha Aoi in a NOVA war, he wishes to follow in his sister's footsteps and learn the skills he wishes to master. Meanwhile, Satellizer is shown dominating another carnival, until fellow second year Ganessa Roland challenges Satellizer to fight her. Kazuya then arrives while being toured by Chiffon Fairchild, the student president. However they are interrupted by Ganessa and Satellizer's fight. Kazuya then looks at Satellizer and sees her as his sister Kazuha. Kazuya then hugs Satellizer and buries his face in her breasts, which causes her to freeze up and she is left open to an attack from Ganessa. 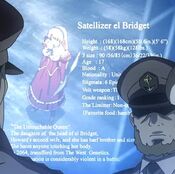 Ganessa declares she will defeat Satellizer.

...and disrupting the fight between Satellizer and Ganessa.
Add a photo to this gallery

Retrieved from "https://freezing.fandom.com/wiki/Untouchable_Queen_(episode)?oldid=49602"
Community content is available under CC-BY-SA unless otherwise noted.