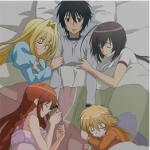 Hi, welcome to Freezing Wiki! Thanks for your edit to the Thread:15888#24|Chapter Release page.

I was curoius, where'd you get the info that his first name is Abebe?  Right from the manga itself?  That just puzzled me for a bit, as I'm sure it'll be spelled differently in English.  Maybe his name is supposed to be Abe or something (short for Abraham) and it came out Abebe in Japanese.  Just wondering, mind you.  And thanks for all you do.

I think my spelling and grammer edits might have done something to your most recent additions to the timeline, could you check it out and make sure your edits went through?

EDIT: I just checked, it did. It looks like my edits caused the page to revert to an earlier version, I've undone it and will proceed to do my edits all over again to make sure your changes are kept.

Do you do other manga that u translate besides Freezing?

Is there other manga you translate, ReDraw, and clean besides Freezing?

Is there other manga you translate, ReDraw, and clean besides Freezing?

Hey there! I just wanted to know if I can make announcements on my Freezing blog about your releases so when you guys release a chapter I can communicate it to about +500 people on Tumblr!

I'll probably be featuring one page on each announcement post I just need your permission :)

Godric, please refrain from making multiple edits to a page by individually editing each section. Instead just do one large edit by using the full-edit button. Perception1 (talk) 21:35, September 9, 2015 (UTC)

We're did you get the pages of rejection 1,2 and 3 from please tell us

This has been answered I think in various places on the wiki. Look also at my main wiki profile page and you might discover something obvious

Hi there. Is it bad to ask your email address here, because I plan on contacting you in the future, and I don't know where or how to ask for it?

I can be contacted via talk here, or on the contact form in the scanlating blog.

Thanks. Hate when those issues crop up. It really makes you want to stop editing... -;)

It's driving me nuts. I wanna be home with my computer editing freezing! Lol.

Well, that and Sekirei, and other projects.

Half my gut is still open being drained so... Don't see a easy end to it. (One of those vac dressings to keep infection and loose body fluid out)

Making some headway on some good walks tho, so I'm feeling good otherwise. Must getting way impatient.

Hi there. In regards to the documents I sent you (Kikou Kyuseishu Gungel Setting Notes), I not sure if it is true, but what I did was save it on Google Drive and share it to you. Hope you got it.

I got something that again wouldn't open at all. It happens from time to time.

Not sure why to be honest.

I've just thought of something. If you can't get the document, I decided to just send it by PM in your fanfiction.net account. How about it?

Go for it if you think it'll work.

my email is midnightmusic20@gmail.com because my other gmail  account is work

Hi Godric it feels like it has been a long while since we spoke, but I have been meaning to ask, any new series you have been translating or anything from your scanslator group?

Just wondering. Hope you are doing all right.

Well, we have the usual series, just moving slow waiting on proofreader, quality checking and redraws... takes the Wind out of the sails a wee bit.

Hare kon, Yuizaki-san ha Negaru are ending, and Kunoichi ni Ichi is half done... a couple others finishing up to.

I seriously miss being backlogged in Freezing scripts...

Continuing where we left off. Edit

Just want to say. I understand you miss Freezing (although I can't really miss it as much but I wish there was more anime for it, but have you checked the Cross Make doujin chapters?)

ALSO Hare Kon & Yuzuki-san I heard of the series, they look interesting but I haven't found the time to read them. Been reading a lot of other manga series. But seriously though those two are ending soon? Man that sucks. Kunoichi no Ichi didn't they have two manga series?

Lastly any news about Sekirei or the author of Sekirei? Because I heard Sekirei was getting a sequel at some point (I may have misunderstood that though?)  Tdfern14 (talk) 04:03, September 22, 2019 (UTC)

Sekirei got what’s I called a mid ending spinoff. Look up “365 days without her”. It’s already been released on amazon in English. We managed to get 2.5 chapters done before it was released.

She has had her hands in a couple series since ending Sekirei, Brave Star Romantics is hers but ended after a couple volumes. The characters are all reminiscent of Sekirei itself. Notable differences are “Minato lookalike with a 8 pack abs body”... and one of the main love interests reminded me more of a Benitsubasa...

Yuizaki is done in japan, but we are still working on the last couple chapters. Redraw hell. It almost feels like the mangaka knew and decided to make it harder...

Hare Kon went on hiatus only to come back due to the mangaka’s childbirth. We’re guessing that she didn’t realize how much work a newborn and writing drawing a weekly series would be. It’s been ended as far as I’m aware. (We have 2-3 volumes left until it’s done)

Definitely want a third season of Freezing (and a 3rd and 4th if Sekirei) but it doesn’t really look like it’ll happen.

Continuing where we left off part 2 Edit

Maybe the mangaka found a way to make pirating harder by making a lot of typesetting and redraw.

I heard Sekirei creator is making a new series called Lockchain or something like that?

Retrieved from "https://freezing.fandom.com/wiki/User_talk:GodricKharg?oldid=69420"
Community content is available under CC-BY-SA unless otherwise noted.