Freezing Volume 8 is a tankoban collection of previously published chapters from a monthly pulp manga magazine of the Freezing manga serial.

Having claimed ownership over Satellizer, Louis L. Bridget has Holly Rose attack Kazuya when he defies Louis even after learning that Satellizer's Stigmata belonged to his sister Kazuha Aoi. Satellizer blocks Holly's attack and the two girls fight. Holly, the top ranked junior in England, easily surpasses Satellizer's speed with superior control of her High End Skills. Satellizer pushes herself and activates the Holy Gates. As Kazuya negates Louis' Freezing, Satellizer performs an Accel-Tempest to slash Holly then a direct frontal attack to defeat her. Prodded by an angry Louis, Holly gets up and asks Louis if he ever loved her, but when Luis rejects her, she attempts a murder/suicide by stabbing him, and both of them go off the cliff. Satellizer jumps to their rescue and succeeds. Louis recovers in the hospital where Violet, admitting that she knows about Louis' feelings, pushes him to love Holly as she loves him. When she leaves, Louis and Holly reconcile and begin to have a serious relationship.

Following their return to West Genetics, Satellizer and Kazuya learn that the E-Pandora Project, which implants Stigmata into regular people, has been approved by the Chevalier. Chiffon Fairchild, Elizabeth Mably, Satellizer, and Rana are selected to go to Alaska with their Limiters.

In a side story, the third-year and second-year girls have a mixed soccer match, however, their tackling manoeuvres result in clothes being shredded.

This volume contains 7 chapters, covering Part II of the Siblings Arc and the first chapter of the E-Pandora Project Arc. 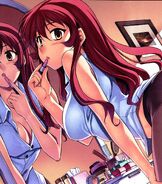 Retrieved from "https://freezing.fandom.com/wiki/Volume_008?oldid=59368"
Community content is available under CC-BY-SA unless otherwise noted.