In 2061, following the death of Kazuha Aoi, Gengo reflects on the death of his oldest grandchild, whose body crystallized following her Nova-Type explosion. He aims to keep the "hyenas" of the Chevalier away from all parts of Kazuha's corpse including the fragments of her Stigmata. He needs a distraction and readies to initiate Project Valkyrie.

In March 2063, Gengo Aoi attends a Chevalier council meeting announcing plans to continue research into the Heroic Stigmata. Afterwards, a disgruntled Gengo meets with Alfred Hughes and the two discuss the skepticism of their colleagues concerning Kazuha's Stigmata. Alfred notes that the United States is pressing for an independent investigation into the matter. Gengo even swears to resign should Hughes give in. Alfred notes that after all these years Gengo still knows how to make people dislike him. He asks Gengo to be straight with him regarding the Heroic Stigmata, but Gengo sticks to his report and adds that he is working on a new project to create more stable Stigmata. He goes on to coldly declare that he will never allow Chevalier to have his granddaughter's corpse. Alfred concedes, but reminds Gengo to get results quickly.

Back at his own facility, Gengo stares at a massive Stigmata crystal held within a tube and ponders how humans always look for and accept the easiest answer. He asks Kazuha if she agrees, and then apologizes for having been unable to protect even her corpse.

The scene cuts to Gengo on his private jet, accompanied by Su-Na. She inquires about the timing of their trip to England, and guesses it has to do with the L. Bridget family. Gengo replies that it doesn't; he explains that they're going to someplace they can prepare his top-secret project. Changing topics, Gengo asks Su-Na how she is feeling, if any complications have arisen from her new Plasma Stigmata. Su-Na affirms that she is fine and jokes that he'll be the one in trouble if the Stigmata aren't safe, which amuses Gengo. Sobering, he voices his doubts that things will continue to sail smoothly, since the others aren't as gifted as Su-Na. He explains that research into the Heroic Sigmata is accelerating, meaning something big will be needed to satisfy the Chevalier council, something like a form of Stigmata that an average human can use. He expresses excitement over seeing what kind of people are waiting for them at their destination.

Arriving in England, Gengo and Su-Na are greeted by Edward Barnett, a wealthy business man whose company supports the Chevalier. Gengo thanks Edward for meeting him, but Edward states he is happy just to be of service/ Gengo reminds Edward of an opportunity he extended to one of his daughters. Edward expresses hesitation given the secretive nature of the project, to which Gengo understands but asks if he can speak to the young lady herself. The two are suddenly interrupted by the lady in question, Christine Barnett, who exclaims that she was fine with the idea. Edward quickly reprimands Christine for her lack of manners. Edward apologizes on his daughters behalf but Gengo politely brushes the apology away, although his attempts are hampered somewhat by an annoyed Su-Na. Christine then names herself as one of Gengo's biggest fans, citing his creation of the Pandora as nothing short of amazing. After hearing that she wished to become a Pandora herself, Gengo explains the Valkyrie Project and how it will enable people just like Christine to help in the war against the Nova. Edward attempts to ask for more time to consider, but Christine cuts through and simply asks if she will become a Pandora. Smirking, Gengo states she will become a Valkyrie, one that can stand even with Pandora. Christine declares her intentions for joining, surprising Gengo when one turns out to be a desire to show up her younger sister, but before she officially joins, Christine asks Gengo for a favor.

Christine desires to see the power of a Pandora up close, so she asks to fight Su-Na, who agrees but sharply offers Christine the chance to back down. However, Christine refuses to back down. The two proceed to a boxing ring where Christine readies herself with sparring equipment, while Su-Na leisurely waits. Christine makes the first move and punches an unflinching Su-Na in her face. A surprised Christine takes a good look at her opponent's scarlet red eyes that bear a carnivorous glare. Christine immediately draws back and deals a backwards roundhouse kick that strikes Su-Na's Plasma Stigmata-enhanced body. Christine promptly fell with a broken foot and Su-Na menacingly looms over her frightened opponent, sadistically asking if she was mentally prepared to face the Nova.

Gengo and Su-Na subsequently made their way to Italy and enjoyed some excellent pasta and fine wine for continuing their search for another potential Valkyrie. They are approached by waitress Tiziana Caldani, a former Pandora with a compatibility rate too low to effectively continue service. Tiziana was cordial to the pair, introducing herself and expressing admiration toward Gengo and all of the other Pandora continuing their services. Tiziana soon demonstrated her clumsiness after spilling some very expensive wine, earning her boss' anger.

While Su-Na and Gengo discuss their interaction with Tiziana, the former Pandora is taken outside by her boss and sexually harassed to pay for the wine she spilled. The situation escalates to the man beating Tiziana and threatening to sell her into prostitution after expressing a desire to rape her. Su-Na walks in on the scene and subsequently threatens to crush the man's skull with her finger tips. At Tiziana's plea, Su-Na releases the man but question why Tiziana, who has been trained, did not fight back. Tiziana explains that it is the only job she has and cannot risk being fired. Gengo appears and offers her a chance to fight more mankind once more.

At another restaurant, Tiziana quickly accepts entry into the Valkyrie Project after Gengo explains the details. Su-Na and Gengo then board a plane to Germany and they discuss the wonders fate that brought them to Tiziana even though they were not looking for her. Upon arriving at Panzer Genetics in Germany, they meet Angela Dorothea Franca, whom Su-Na is shocked to see. 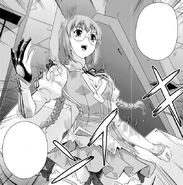 Retrieved from "https://freezing.fandom.com/wiki/Warriors_of_Valhalla_Arc?oldid=68274"
Community content is available under CC-BY-SA unless otherwise noted.